Android 12 Beta: Here’s What To Expect In The New Android Update 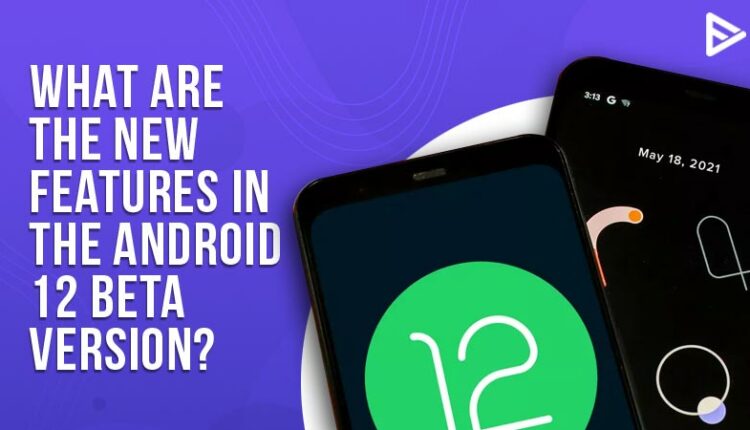 What is the Android 12 Beta Version called?

The Android 12 Beta version is released to particular devices to check and improve the performance before the public launch. You can use the upcoming features and update any bugs, if any, to be fixed.

Will the Android 12 be compatible with my phone?

The Android 12 will be compatible with all the pixels devices. Also, devices with lighter UX will be the next to have the latest Android version like ASUS’ Zen UI. Later the one with the heavy UX like Samsung and MIUI will gradually receive the newest Android 12 version on their devices.

This latest version gives you the best customization options to personalize everything according to your requirements.

With Android 12 on Pixel devices, you will be able to completely personalize your phone. Yes, you read that rightly! First, use a custom color palette and redesign the widgets. It uses color extraction that will help you choose your wallpaper. The system will automatically determine which colors are dominant and complementary. It then applies those colors across the entire Operating System, including the notification shade, the lock screen, the volume controls, and much more.

The minute you start using your Android 12 device, you will feel how it comes alive with every tap, swipe, and scroll. Your phone will respond to your touch with smooth motion and animations. For instance, while you dismiss your notifications on the lock screen, the clock on your phone will appear more prominent, so you know that you’re all caught up!

Your Android device will now be faster and more responsive with better power efficiency, so you can use your phone for longer without charging it. In addition, the platform reduced the CPU time required for core system services by up to 22%. Also, lessening the use of big cores by the system server by up to 15%.

The notification shade is one of the most essential spaces on your phone hence quick settings, and the power button has been purposefully reinvented for easy access. The notification bar is now more intuitive and playful and has a view of your app notifications, whatever you’re currently listening to or watching.

Quick Settings allows you to control practically the entire operating system just with a swipe or a tap. Moreover, the Quick Settings space doesn’t just look and feel different. Imagine Google Pay and Home Controls while still customizing whatever you want at the tip of your finger! All of this is to give you easy access.

You can now long-press the power button to call out the Assistant to make a phone call, open apps, ask questions or read aloud articles.

Android 12 new features include more transparency about which apps are accessing your data. In addition, more controls are given so you can make choices about how much private information your apps can access.

Yes, the new privacy dashboard will offer you to view your permissions settings as well as data is accessed, how often, and by which apps. In addition, you can easily revoke app permissions from the dashboard itself!

Also, there is a new indicator to the top right of the status bar that will tell you when your apps are accessing your microphone or camera. Also, if you wish to remove app access to these sensors for the entire system, there are two new toggles in Quick Settings.

Live Caption, Now Playing, and Smart Reply are some of the new Private Compute Core features enabled. All the audio and language processing will happen on-device, isolated from the network to protect your privacy.

Has Android 12 been released?

Android 12 was released on October 4th.

Can I upgrade to Android 12?

If you have a Google pixel system, you can immediately get the Android 12. Samsung Galaxy, OnePlus, Oppo, Realme, Tecno, Xiaomi, and Vivo will also have the version soon. Some of them were a part of the beta version too!

Is it safe to install Android 12 beta?

Yes, it is safe to install the Android 12 beta version on your phone.

How to Convert TikTok Audio Download to MP3 (January 2022)

How To Fix Google Meet Microphone Not Working/Responding On Mac And Chromebook?