Here's about the most hated video on YouTube ever. 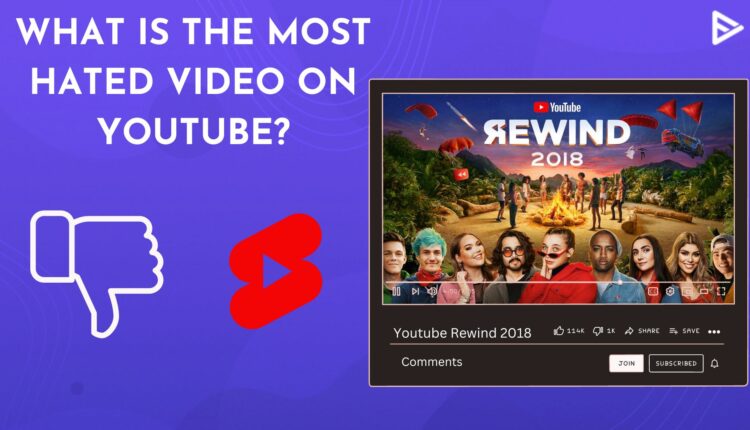 Are you wondering what the most disliked video is on YouTube? As you know, the dislike count on YT was removed in November 2021. But according to various stats, the most hated video on YouTube is the ‘Everyone Controls Rewind,’ AKA ‘YouTube Rewind 2018.’

Since YouTube shorts were launched and if YT shorts are considered videos, then, according to the stats, the most disliked YouTube shorts are ‘Revenge,’ uploaded on 26th July 2022 by Lucas and Marcus, and ‘Wakt wakt ki baat h’ Uploaded by Bobby Chaurasiya (Indian YouTuber) on 10th May 2022.

In the music video category, ‘Baby’ by Justin Beiber and ‘Baby Shark Dance’ by the kid’s YouTube channel Pinkfong are also at the top of the list of the most disliked videos on YouTube.

So below, let’s see what is the most disliked video on YouTube and why.

As we have mentioned, these are the names of all the top 5 videos that have the most dislikes on YouTube. So let’s break down each video and see why they are at the top of the list of YouTube disliked videos.

YouTube Rewind 2018, or Everyone Controls Rewind, officially has the most dislikes on YouTube. It was uploaded by YouTube in 2018 as the usual year-end rewind video. But the fans were super disappointed after watching this video. The video was heavily criticized by all the viewers and YouTubers.

The video is 8 minutes and 13 seconds long, and many unpopular YouTubers were a part of the video. Also, it included many outdated videos. The rewind video failed to include prominent YouTubers such as PewDiePie and MrBeast. The video also did not have the rivalry between KSI and Logan Paul. Will Smith appeared at the beginning of the video and became the meme of the year in 2018.

In just a week after uploading the video, it got 10 million likes from the viewers. Since the removal of dislikes counts on YouTube, the 2018 YT rewind is currently believed to stand at 20 million+ dislikes as a long-form video.

The most disliked song on YouTube is ‘Baby’ by Justin Beiber. Although the music video has 22 million likes on YoutTube, the dislike count goes up to 13.98 million. This is because the pop star has a bad reputation and has had a lot of controversies surrounding him since he entered the industry. However, this music video comes 5th in the list of YouTube’s most disliked videos below the infamous ‘Baby Shark Dance video.’

Yes, a children’s nursery rhyme is the most disliked song on YouTube’s most disliked videos list! The Baby Shark Dance was uploaded by Pinkfong, a popular children’s music channel, on 18th June 2016. Although the music video gained popularity among the little ones, the video is considered irritating by many adults and hence holds a dislike of 17.32 million (estimated).

YouTube Shorts was launched globally in July 2021. Since then, millions of shorts have been uploaded daily by viewers. However, the 2 most disliked shorts on YouTube are ‘Revenge’ by Lucas and Marcus and ‘Wakt wakt ki baat h,’ uploaded by Indian YouTuber Bobby Charasiya.

But both the shorts are considered cringe-worthy by the viewers and irritating to the point where they stand at the topmost on the list of most disliked YouTube videos.

The dislike count was removed shortly after YouTube rewind 2018 emerged as the most disliked video. Also, many arguments were considered regarding dislike counts, which created a toxic environment for the creators.

Q2. Can YouTubers See How many Dislikes They Received on Their Video?

Yes, YouTubers can see the number of dislikes received on their videos. However, they cannot know the user’s name who disliked their videos.

The last rewind video was uploaded on 5th December 2019. The video’s title is YouTube Rewind 2019: For The Record. the video is 5 mins 36 seconds long, and even this video wasn’t popular. It received a good number of backlash as well. Since then, YouTube has stopped uploading the year-end rewind videos.

YouTube uploaded the Rewind 2018 video in good faith by including small creators, and they thought of “Giving the viewers what they want.” But it backfired on YouTube.

Since then, YouTube uploaded the ‘YouTube rewind 2019: For The Record,’ and even that video failed to revive the year-end rewind trend. Sadly, This was the end of YouTube rewind videos. The viewers as well, have not appreciated the rewind videos on YouTube.

How To Fix Payment Or Billing Issues With YouTube Premium?