Aren't Disliked Videos More fun the the liked ones? Here is a list of the 7 most disliked YouTube Videos of all time 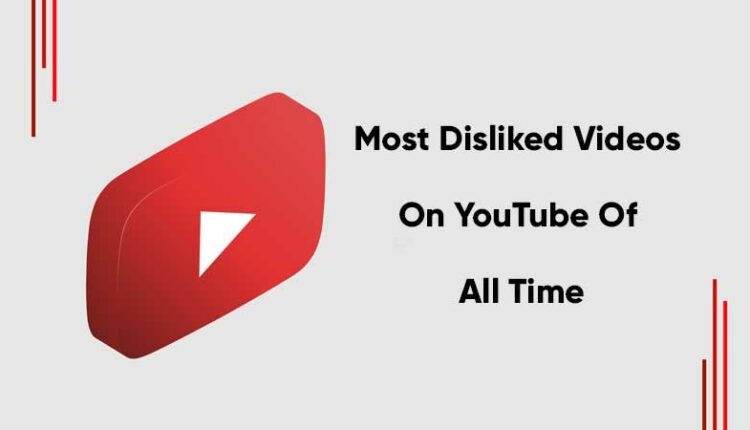 The most disliked videos on YouTube are even more fun to watch than the most liked ones. However, some of the most disliked youtube videos are not really disliked because of how bad they were, but due to controversies, random digital rage, annoying animations, and much more.

And today we’ll find the top most disliked videos on YouTube with millions of dislikes and also discover why they are so disliked by YouTube Users all around the world.

Countdown to the 7 Most Disliked Videos on YouTube Ever

As funny as it sounds, the YouTube Rewind 2018 is literally the most disliked YouTube video on the planet. Yes, we are not kidding. After having gone through this YouTube should’ve probably removed the dislike option altogether but they didn’t and we have something to ponder over.

Well, the reason why the video broke the barriers of the most dislikes on a YouTube video is because of the lack of structure and way too many cringeworthy moments packed into one 8 minutes long video with bad editing. With 19.46 million dislikes by 2021 and a dislike rate of about 86%, the video stands on the top of the list of the most disliked videos on YouTube.

Other than being the second most disliked youtube video, ironically this song for children is also the most viewed video on youtube with about 9.18 billion views. Now the fact that kids all around the world listened to the baby shark dance so much is probably the reason for the 13.7 million dislikes and a dislike rate of 31%.

The only theory we can come up with is that disliked on the youtube video is the rebellion of parents and older siblings tired of listening to this song on loop. That’s the funny thing about children they get bored too quickly or never do.

The hatred for this movie stemmed out of the controversy revolving around extreme nepotism in Bollywood causing the video to reach a bashing 4.2 million dislikes on YouTube in 24 hours which then became 13 million dislikes within a week with a dislike rate of approximately 95%.

The thing about Justin Bieber you can never deduce whether the people like or dislike his videos. He is one of the biggest YouTube sensations on the internet and one of his earliest songs, “Baby” happens to be the 4th most disliked video on YouTube and at the same time, the 16th most liked youtube video with 18.71 likes.

As far as the most disliked videos on YT, Justin Bieber’s Baby, more than a decade after its release remains an integral part of pop culture and arguably the most discussed YouTube video.

Yes, we have yet another children’s song in our countdown. And here’s another thing that’s curious, poor Johny’s song is barely a minute and a half long, and yet it happens to have over 10 million dislikes and a dislike rate of about 40%.

But then again the problem is probably the same as the baby shark dance, annoyed parents, and angry siblings. However, it is a bit strange to see our beloved childhood rhymes as some of the most disliked videos on YouTube in 2021.

Yes, yes we know. It’s kind of shocking that two of YouTube’s own productions have ended up on this list of the most disliked videos on YT but well, it is the truth. And I think we see a pattern here, which is probably why they never released an official YouTube Rewind 2020.

However, the intent of the YouTube 2019 rewind was to demolish the critics of YouTube Rewind 2018 but then again, it probably didn’t work. Yet the video is much better and shorter than its predecessor and seems to have a pretty good amount of likes.

And here we have yet another video made for children crashing the list. The Russian video about colors happens to be among the most disliked youtube videos ever for more than one reason. And let us give you a short breakdown of this 5-minute long video.

With a Russian narration and the “Old McDonald had a Farm” playing in the background the video involves a bunch of eggs with creepy smiles being filled with colors, breaking down into pieces, and forming smaller eggs. Um, can’t imagine it? Take a look and let us know.

We just saw some of the funniest, weirdest, strangest, and most disliked videos on YouTube. And while you had fun reading about them, it tells you a little about the audience on YouTube. They are unpredictable. However, they also give several Youtubers tips about what not to do. And as far as the most disliked youtube videos go. To them it is publicity and we all know that phrase that says, “ All publicity is good publicity”.

Top 7 YouTube Alternative platforms that you need to know